What I Want to See In My Science Fiction Romance 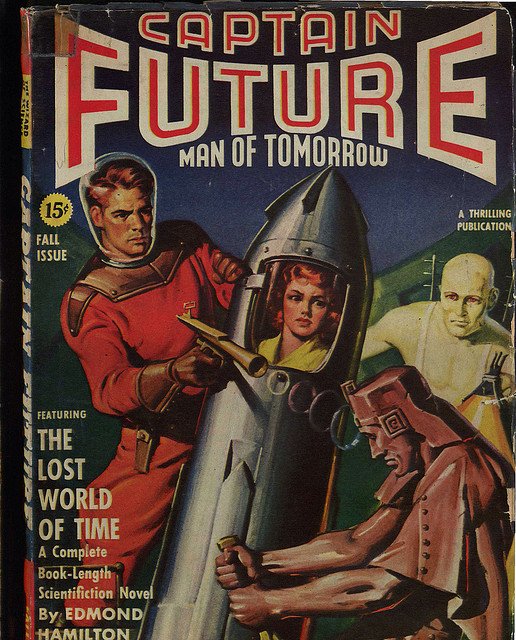 Miss Primm is an unabashed reader of science fiction romance. SF was my genre of choice when I tore up the libraries from age six up, and as I’ve (clears throat) matured, I gained an appreciation of the SF Romance category. But let’s have a moment of clarity here. Most of the titles under this category on Amazon are bad. Let’s face it, the writing sucks.

I happen to believe that writing sex into a piece does not automatically classify it as literary trash. Sex is a part of life, and I really don’t understand all the delicacy surrounding the subject. You remember this scene in Star Trek don’t you?

Talk about your uncomfortable conversations. But back onto the subject.

Now, I’m not going to name names here. That isn’t the point to this little piece. But I think its high time to call out those writers who use sexy aliens, mating drives and untenable theories on space flight (if, indeed discussed at all) as set dressing for their stroke pieces.

Folks, for the love of what higher being you believe in please, please learn a bit about the genre in which you write.

And to guide you, here is my wish list for good SF romance:

1.) It may be a small part of your story but if you use any science use it well. Understand the subject you are writing about. In the age of the internet there is no excuses. Yet inaccuracies abound even in known facts. For instance in one story I recently read the MC talked about the farming done on a new planet, but said there were no insects on the planet. Heaven on New Earth? No, doom to failure. Insects, worms and the like are essential to the eco-system. You do not have flowers without little flying things that help to pollinate them. If you question this, go look up on the internet why there is so much concern about the death of bee colonies in the United States.

2.) If you are going to have two different species have sex, then don’t make one of them a quasi-human with different skin or features. These people have cultures, you know? Have you heard the term world building? Yeah, that applies to culture building too. We all have them, and a set of expectations that goes along with them.

3.) If you are going to have non-com, or anything that smacks of abuse and control please put that in your front material so I know not to buy your book. Thank you.

4.) Stop making all the space-faring cultures “better” than Earth’s. Some of these places sound like Utopia and they are boring. Make your worlds interesting with some real tension and conflict.

5.) For heaven’s sake, put some real words in the male MC’s mouth. Some of them sound like four-year olds on testosterone. And please, stop making them go crazy when another male touches their mate. Really, an adult male of any species (especially ones who are supposed to be in charge of others) should be able to control themselves. It’s not sexy and it’s not fun. A little jealousy is okay, but this over the top stuff is just annoying.

While you’re at it put some intelligent words in your FMC’s mouth too. Saying that “If felt amazing,” doesn’t amaze me.

I could go on but I have some writing to do. But these seven points should keep some writers busy. An if you do write a good book I promise, I’ll buy it. And tell other people it is good too.

Photo published under a Creative Commons License by Flickr user Colleen A. Bryant.