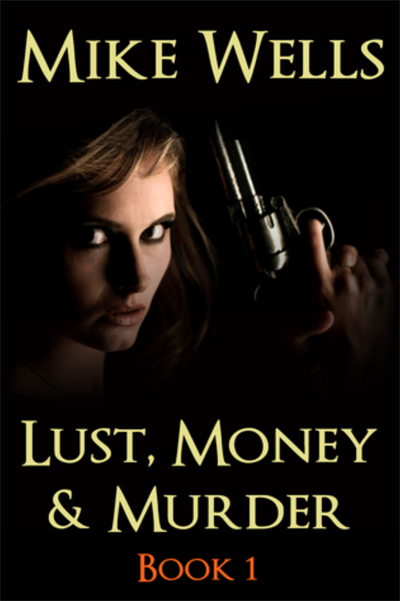 Mike Wells generously gives the first installment of his series, Lust, Money and Murder as a perk for signing up to his Twitter feed. He calls it a book, but in length and breath it is not a book, it is the first part of a serial.

The premise of the book is interesting and the plot in this first part of the series has many twists and turns. Elaine Brogan is the only daughter of a doting lower-middle class father. At sixteen she convinces her father to pay for a modeling school, which turns out to be a scam. Mustering her bravado, when she realizes how she was taken, she demands her money back. Surprisingly the scam artist gives her the money—in cash. But the cash isn’t what it seems, and when dad deposits the money into an account for his daughter, treasury agents visit and arrest her father. Ellie is left alone in the world and she vows to get even. To this end Elaine vows to become a Secret Service agent, to find the man who ruined her father. West takes us through her education, her application process to become an agent, and her training. Finally she gets her first posting, and then her second. This is where the story picks up.

Mike knows how to keep the action moving, and his descriptions had me right there in the action. It’s obvious he’s done his homework on what’s required to become a Secret Service agent and that’s commendable. Mike puts the words together correctly. He even drew a few tears from me at Elaine’s heartbreaking situations. But here’s the thing. In this first installment there are three things that don’t work for me.

1.) The prologue—It’s interesting. Far too interesting. When the chapter ends, and we go to 1985 to the day of the main protagonist’s birth, I’m thrown right out of the story. And I’m not sure where the unnamed evil bad guy fits in, and probably won’t know unless I buy the next two installments, but I’m left hanging, and not in a “oooh, I want to see what happens” way.

2.) The long exposition of Elaine’s relationship with her father, her schooling and training is, um, back story and should remain such. Particularly unrevealing is how and why she lost her virginity. I’m not sure who cares (the author did) but I didn’t. I think backstory works best as the juicy tidbits that are dropped like breadcrumbs throughout the story. It’s the blade that’s hidden until needed to slice away the onion layers of the character and her motivations. To me its much more interesting to see the character in action, and then drop the tidbit as to why she acted like that. Particularly in this part of the story is a good amount of telling, not showing. Put it this way, once you get to Secret Service Agent status you are badass, regardless of whether you wear skirt or slacks, so you don’t need to impress me with her badassery as she trains.

3.) When we get to the juicy part of the story, Elaine arriving at her second posting, it’s all too brief. We get to this part eleven chapters into an eighteen chapter first installment. It not until then we meet Nick LaGrange, a handsome rake that appears to be all consumed by his job. Now things are getting interesting. Here is a small excerpt of the description of this character:

There was a tall, broad-shouldered man bent over a desk cluttered with papers, stained coffee cups, and other debris. He was counting out money from an envelope, muttering to himself, and scribbling on a piece of paper. Elaine couldn’t see his face—he had long, unkempt brown hair that obscured it. He was wearing faded, holey jeans, hiking boots, and a cracked leather flight jacket over a wrinkled-looking linen shirt.

He looked up, brushing the hair out of his face. He saw Elaine and gave a warm smile. “Hi there.”

Now this is the way to introduce a character!

The next seven chapters has her mooning over her boss for a year, while he acts like he doesn’t notice her. It’s only after a year elapses that things heat up between Elaine and Nick, and then it’s sudden and doesn’t make sense. The author jacks up the ante by having everything falling apart while the badass Secret Service agent is bewildered, confused and surprisingly a bit naïve about what is happening. There are delicious cliffhangers, and there are itchy, uncomfortable cliffhangers, and for my money, the end of this installment falls in the second category.

It would be wrong of me to say this story was written badly. It wasn’t and you shouldn’t stay away. It’s just that it can be rendered better. Mike Wells has the talent to do just that.

Copyrighted photo published under Fair Use provision of U.S. copyright that allows low resolution images for use in commentary.