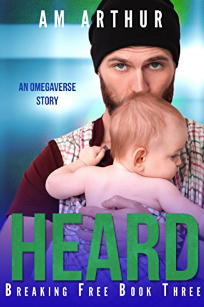 An omega who can’t speak meets an alpha who won’t listen….

Karter Jenks is a first-year constable who’s still trying to prove himself to his superiors, so he isn’t looking for a mate right now. Soon, sure, but he also knows he has work to do to change his alphahole tendencies around omega rights. The Kell Iverson trial opened his eyes to how cruelly some omegas are treated, and Karter doesn’t want to follow in his authoritarian father’s footsteps when he finds his mate. And he absolutely does not expect a homeless omega vagrant and burglary suspect to be his bondmate.

Jax Orris escaped a life of captivity and pain to save himself and his infant son. Living as vagrants isn’t ideal, but it’s better than trusting the authorities who landed Jax in hell to begin with. When their hiding place is discovered, Jax is shocked to feel the mating bond with the young alpha who’s been tracking him—and even more shocked when the constable doesn’t immediately arrest him for his crimes. It helps him trust Karter enough to accept his help in keeping himself and his son safe from the men Jax escaped.

Good writing, decent character development, nice story. It’s easy to feel for Jax Orris and the horror he suffered. It’s never easy to write a standalone connected to a series but the author handles it well, and you do not need to read the other books in the series to understand the story.

The author did a decent job of world-building, though as usual with Omegaverse stories, we don’t get a clear sense of why the society is ordered the way as. It’s not enough to say, well, of course, Alpha’s run things, etc, etc. If you bring me an alternate universe and society tell me why it came about because otherwise, we aren’t talking about humans. This is just my general beef with Omegaverse stories though.

Three things that got under my skin. One was the insta-bonding and the almost immediate acceptance of the two men for each other. Though the author does make an attempt to create the tension of each man not accepting the other at first, it just didn’t ring true. You weren’t ever in danger of thinking they wouldn’t formalize their mating bond. The other was a thread of “mating for the wrong reasons” which never jelled properly and ended up being a paper tiger. It probably should have been edited out. The third was the instant turn around in attitude for Karter Jenks. Once he meets his bondmate he instantly turns into a solicitous mate trying to do everything to win over Jax, though as alluded to in previous stories he was full into Alpha mode. So how does that happen, huh? Though Karter did see some of the horrors Omegas suffer in their alphahole ‘verse, wouldn’t it be harder for him to change his attitudes? If you look into our own misogynistic society, you’ll see that is true, with some segments denying that such misogyny exists.

As a writer, I see the lost opportunity of building real drama and stakes with physical bonding clashing against emotional needs and societal expectations. This story as it stands is a pleasant read, but it isn’t going to get your heart pumping.

But maybe that’s just me because other people seemed to have enjoyed the book. As far as Omegaverse stories go it’s an easy-on-the-brain story. If you are looking for a feel good read, this is it.

I purchased the book through Kindle Unlimited.